Between art and culture

Dussin Restaurant and Inn is located in a strategic position in the eastern Veneto region, not far from important historical and cultural points of interest, such as Venice (The Land of Venice) or the hills where Prosecco is produced, that is Conegliano and Valdobbiadene, easily reachable by public transport. 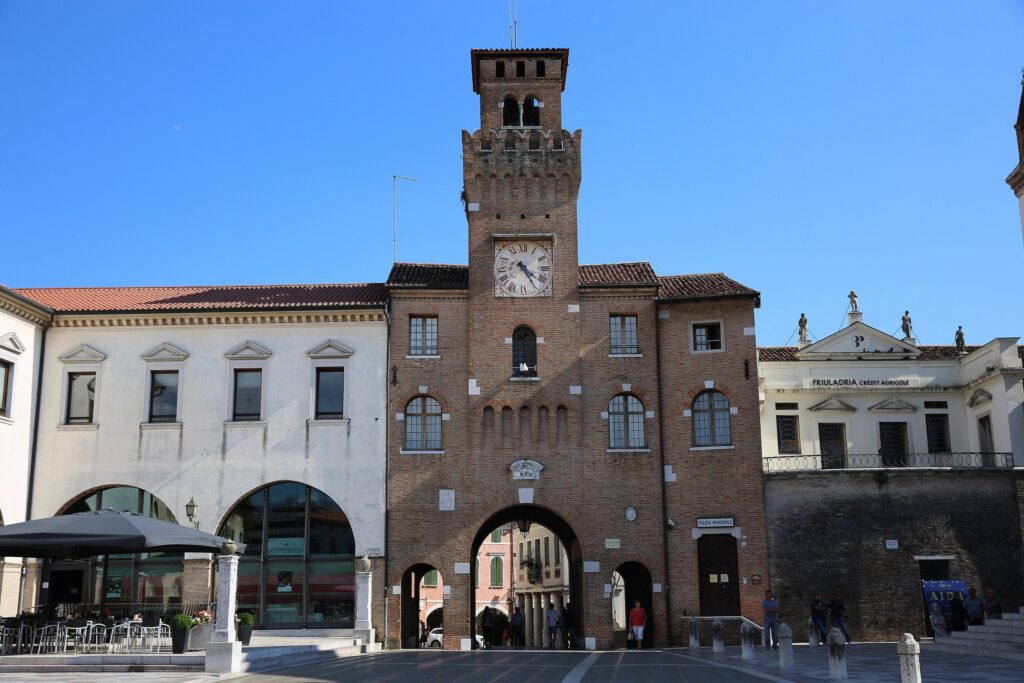 Oderzo, ancient Opitergium, is the city of the early Venetian people. It was built a millennium before the birth of Rome, and the ancient etymon explains its origin and fuction. “Opi” was in fact the Venetian goddess of the harvest, and “terg” means market: so the city was, in the beginning, an agricultural market, and so it is today. Not only that, it is also important to notice the presence of the Knights Templar (who built a temple here in Ormelle).

After 1312 the Order of the Templars was assigned to Philip the Fair, to the order of Malta Knights. In this land, so rich in traditions and culture, these many presences and exchanges of products and the ancient connection of the sea – via the “old Piave,” today called Piavon and the Monticano-Livenza –  allowed a varied and satisfying food and wine presence, in Oderzo and throughout the ancient agricoltura area of Pianura Padana. 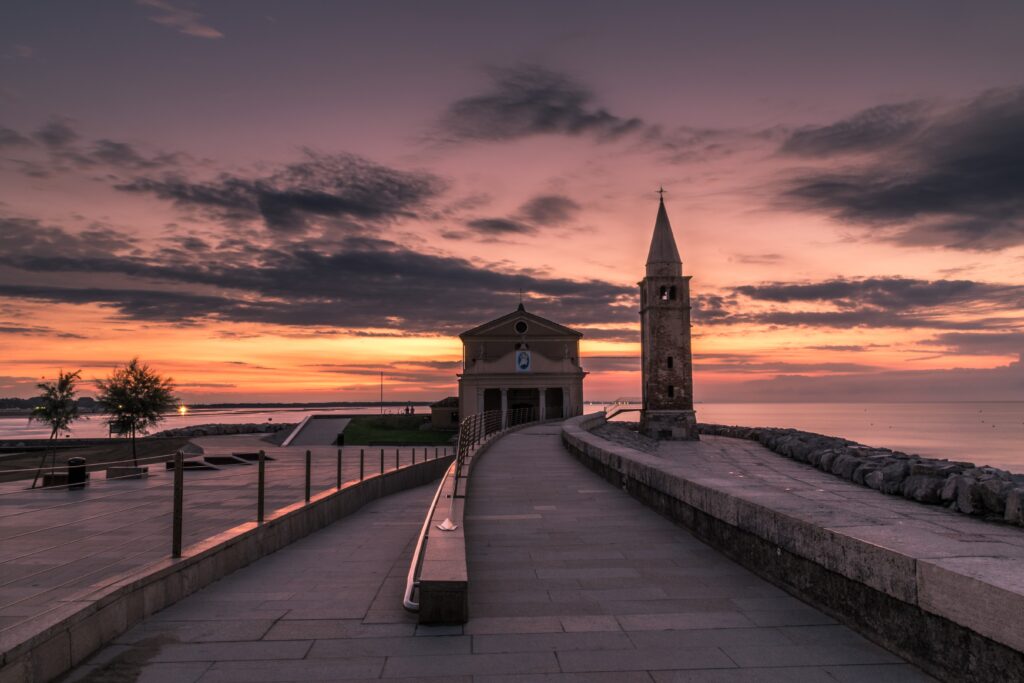 Caorle’s roots date back to the 1st century B.C. (the name comes from the Latin Caprulae, probably because of the wild goats that grazed there), as evidenced by numerous finds from Roman times. Caorle’s fortunes were linked for centuries to those of the Serenissima Republic; the city’s territory was part of the Dogado, that is, the metropolitan territory, and was one of the 9 districts into which the administration was divided, governed by a podestà.

The cathedral from 1038 (formerly a cathedral and bishop’s seat until 1807) is particularly interesting and also the cylindrical bell tower topped with a conical spire, in Romanesque style, from the same period. On the coast there is the Sanctuary of the Madonna dell’Angelo, which was rebuilt in the 17th century on a pre-existing church with a basilica plan. 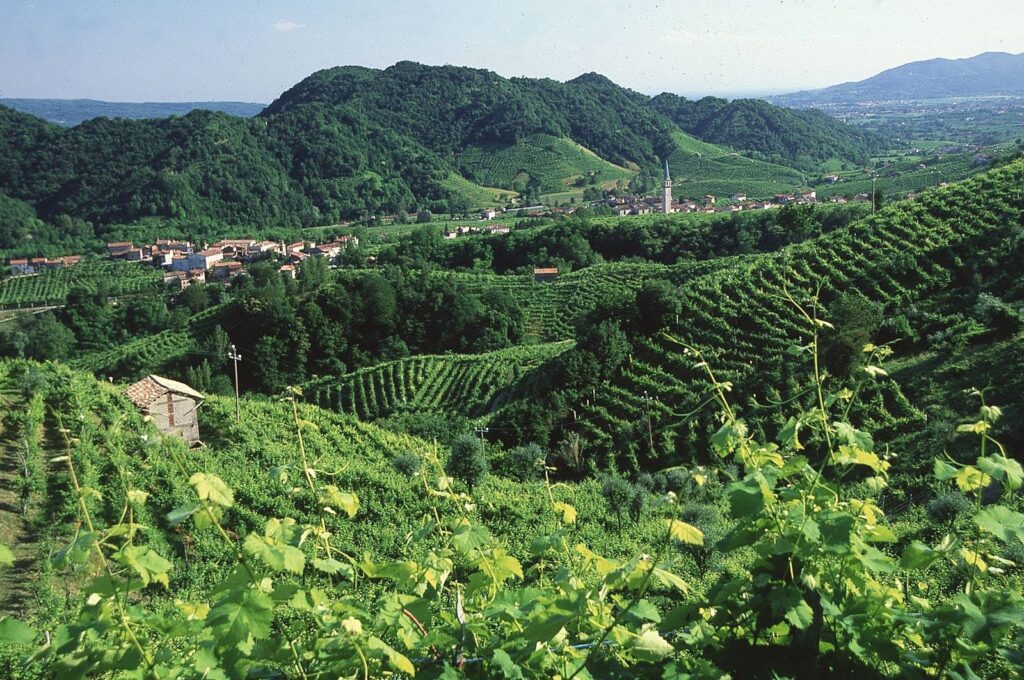 The Road of Prosecco and Wines of the Conegliano Valdobbiadene Hills starts from Conegliano and arrives at Valdobbiadene, going through the municipalities of the Quartier del Piave. The Red Wine Road starts here too.

News of the origin of Treviso was found as a Paleovenetian village built in pre-Roman times on three hills that are located near a bend of the Sile River, in a territory which is full of water resources.

In the year one thousand Treviso became a Municipality and had a great development: it grew bigger and monuments and palaces appeared, which earned it the nickname urbs picta. Living in Treviso meant having a pleasant and comfortable life. At the end of 1300, after years of fights among factions wanting to control the city, Treviso was finally included in the Republic of Venice. San Francesco’s Church, Loggia dei Cavalieri (Loggia of the Knights), Piazza dei Signori and Palazzo dei Trecento are places of great tourist interest. 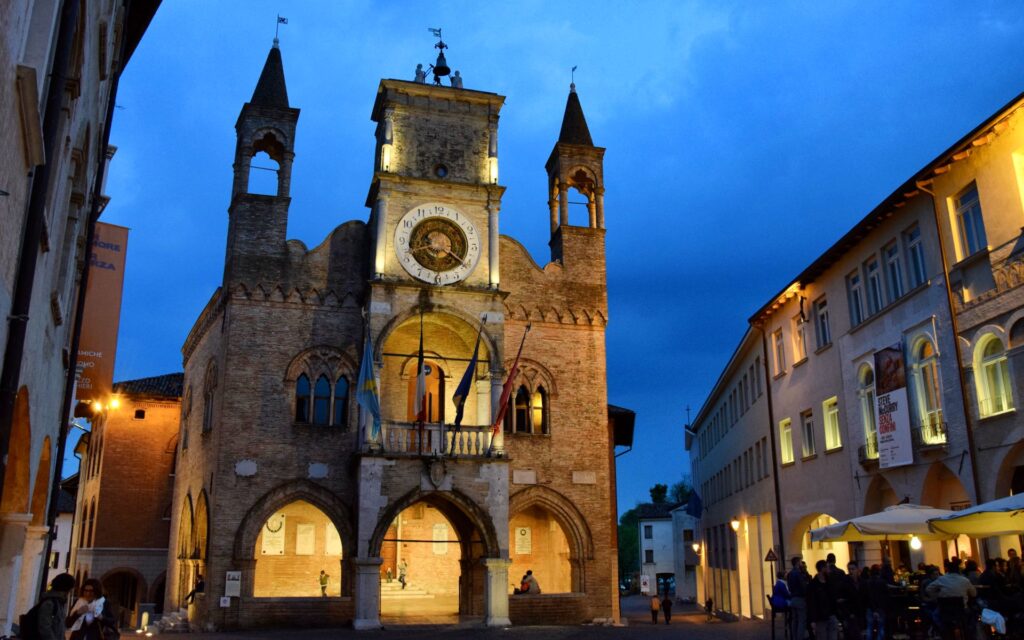 Pordenone was founded during the Roman age and it developed quickly, thanks to the rivers. Its port vocation was also clear in its name: Portus Naonis (Latin for port on the [river] Naone [Noncello]). For centuries it was ruled by the Republic of Venice but then, from the mid-19th century, it started industrializing with the appearance of numerous cotton mills and paper mills. Nowadays a major exhibition center is what it considers as its pride. 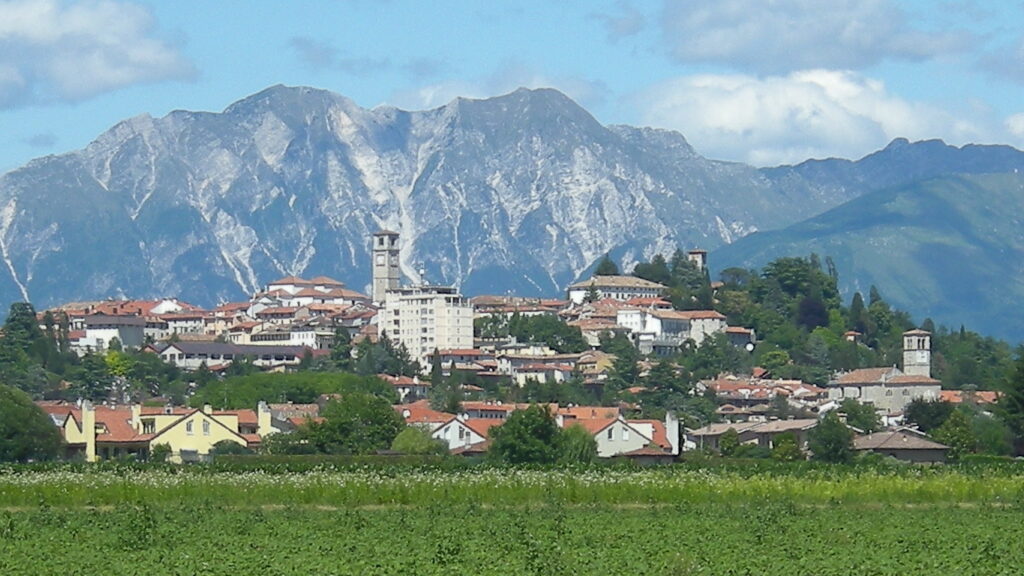 San Daniele del Friuli is konwn all over the world for the production its namesake raw ham. The air which is typical of that area, gives their hams, a unique and unmistakable flavour known worldwide. Not far from the hill, the clear waters of Tagliamento River are the natural home for trout, which is raised and processed in an artisanal way. San Daniele is considered by Friulians as the capital of the Friulian language, that is, the place where the perfect Friulian is spoken; for this reason San Daniele is called “the Siena of Friuli.” 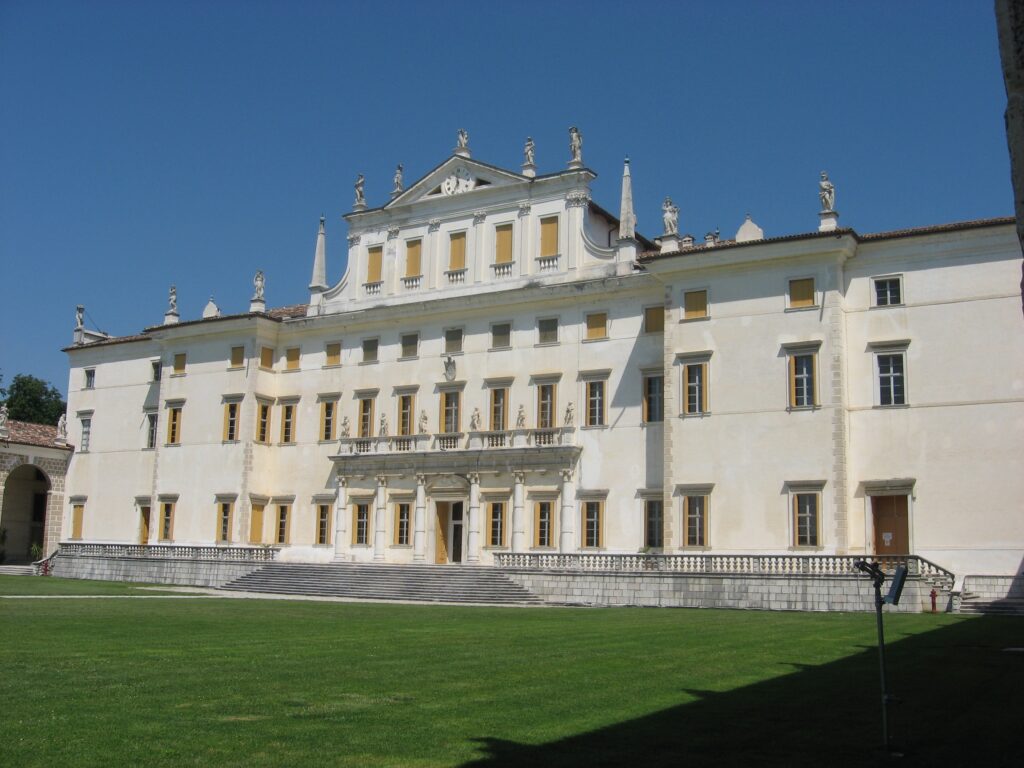 Villa Manin of Passariano is a Venetian villa located in Passariano of Codroipo (UD). It was the Venetian doge’s home; Ludovico Manin. Napoleon Bonaparte and Giuseppina Beauharnais spent a night there, between August 27th and August 28th, 1797. It was right in this villa where the treaty between France and Austria known under the name Treaty of Campoformio (1797) was signed. In addition to being an outstanding piece of architecture, this Villa is also important for its eighteenth-century works of art it displays and for a museum area with permanent exhibits such as a collection of antique carriages and a rich armory. Since 2004 Villa Manin became a Center for Contemporary Art, characterized by an annual programming that alternates tematic exhibitions featuring artists coming from all over the world.

Grado is an important turistic and spa center that developed around 452 CE, when many inhabitants took shelter on the Island to escape hordes of the Huns led by Attila. After the seat of the Patriarchate of Aquileia was moved there in 568, Grado increased its population and acquired a political and religious leading role, witnessed by the construction of Santa Eufemia and Santa Maria delle Grazie Basilicas, both from the late 6th century.

When Venice started to become the main centre of the Venetian lagoons, the Island began its slow decline. At the end of the nineteenth century Grado turned into a seaside resort and hosted personalities like Freud and Pirandello. 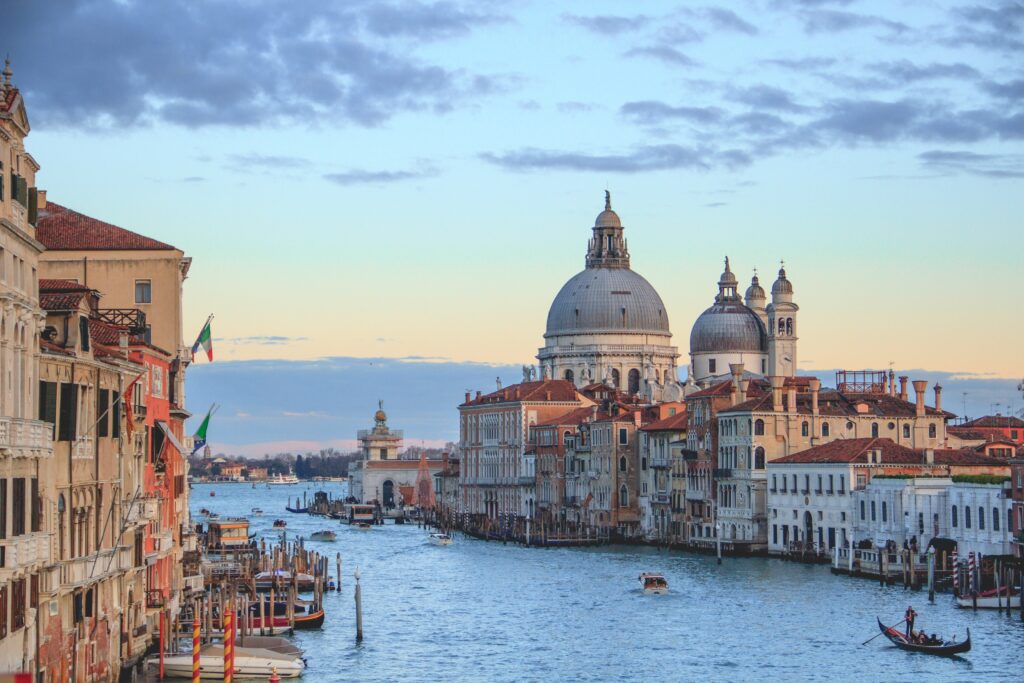 The legend has it that the inhabitants of the Venetian hinterland took shelter in some of the Islands of the lagoon, after various barbarian invasions since the 5th century, particularly the one made by the Huns (452) and the Lombards (568). This way they created the first settlement on Alto Rivo island (which later became Rialto). Over the years it developed thanks to the trade with the East and in fact it is now mentioned among the Maritime Republics with Genoa, Pisa and Amalfi.

The heart of Venice is San Marco Square (Piazza San Marco) which is the only one deserving the name “piazza” (square): the majority is in fact called “campi” or “campielli”. The Basilica of San Marco stands in the middle of the square, coloured gold and covered with mosaics telling the story of Venice. Palazzo Ducale is located beside the Basilica: it was the seat of the Serenissima government and was built in the 15th century with marble from Istria. 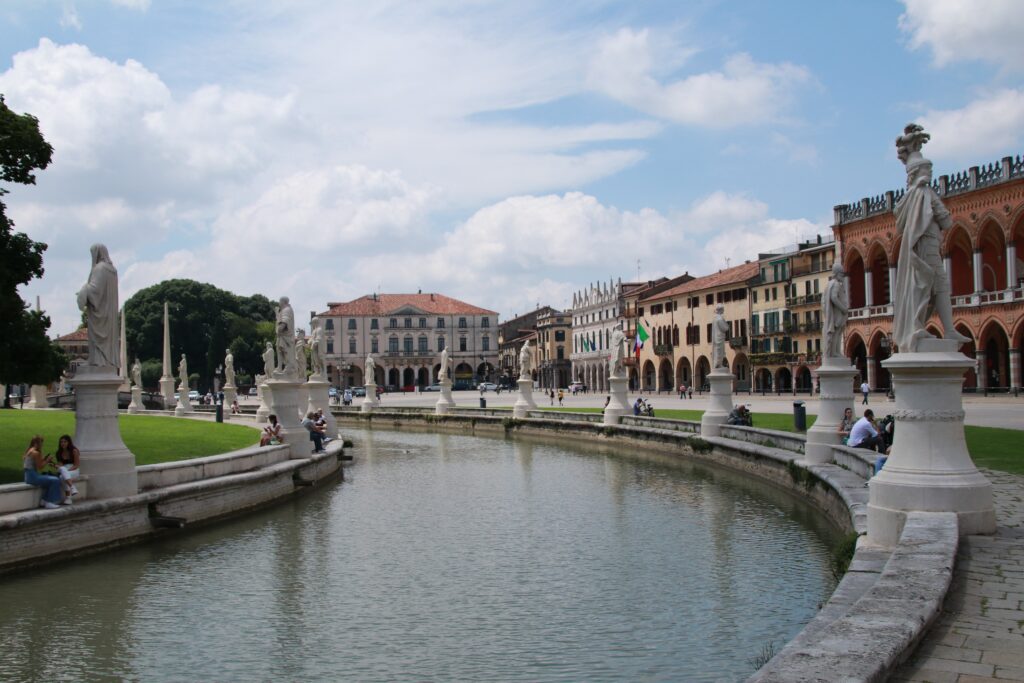 Padua is the Seat of an ancient and prestigious university and it also boasts several vestiges of a glorious cultural and artistic past, making of Padua a destination for tourists coming from all over the world. It is currently an important economic centre and one of the largest and most important intermodal transport centres, including the river one, in all of Europe. Padua preserves one of the  most extraordinary and even revolutionary masterpieces of the medieval art, the Scrovegni Chapel, painted in the early 14th century by Giotto. Padua is known all over the world also as Saint Anthony’s city, the famous Portuguese Franciscan, born in Lisbon in 1195, who lived in Padua for some years and died there on June 13th, 1231. The Saint’s remains are in San Anthony’s Basilica, which is a destination for many pilgrims from the whole world, but also one of the main monuments of the city. 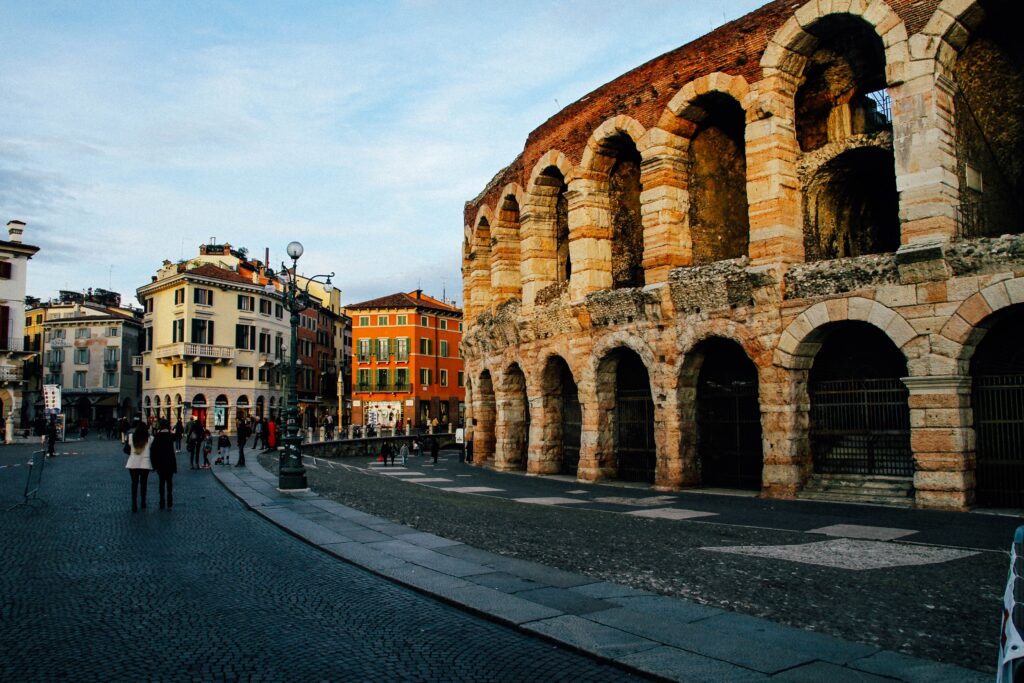 The city of Verona has been declared a UNESCO World Heritage Site for its urban structure and architecture: Verona is a wonderful example of a city that developed progressively and uninterruptedly during two thousand years, integrating artistic elements of the highest quality from different periods. It also represents in an extraordinary way the concept of the fortified city in several crucial stages of European history. Every year hundreds of thousands of tourists visit Verona, many of them are foreigners, due to its artistic and architectural richness (among the best-known monuments are the Arena and Juliet’s house) and also to the different annual festivals (among which the most important are the Arena opera season and the Verona Summer Theater).

Vicenza is known as the city of Palladio – where he built many monuments –  and it is also one of the most important places of art, not only in Veneto. As a matter of fact, it is a destination for cultural tourism, welcoming flows of tourists from all over Italy and abroad. Since it is considered an extraordinary artistic achievement due to Andrea Palladio’s numerous architectural contributions, in 1994 the city was included among UNESCO’s World Heritage Sites, together with the Palladian villas of the Veneto, which are also part of them since 1996.

Vicenza is also an important industrial and cultural Italian centre, heart of a province which is dotted with small and medium-sized companies that in 2007 ranked the third place in Italy in terms of export turnover, led mainly by the engineering, textile and goldsmith sectors.

Since the second millenium b.C. the area of Trieste was the site for important protohistoric  settlements, the castellieri, villages located on high ground and protected by stone fortifications, whose inhabitants belonged to populations of probable Illyrian origin and Indo-European stock.

“Tergeste” developed and flourished during the Roman Empire age, proving to be one of the most important harbours of the Northern area of the Adriatic sea on Popilia-Annia road.

In the 12th century it became a Free Municipality and after centuries fighting against its rival Venice, in 1382 Trieste chose the protection of he Duke of Austria while preserving considerable autonomy until the 17th century. Some places of interest are Unità d’Italia Square, the Town Hall Palace, the Roman theatre and Miramare Castle.

Cortina D’Ampezzo is the largest and most famous of the 18 municipalities that make Ladinia, which is a renowned and exclusive winter tourist destination. In 1956 it also hosted Winter Olympics and still hosts numerous sport events of international relevance. It turned into a tourist destination in the late 19th century, when its incredible beauty made the Austro-German nobility and the English, French, and American upper middle classes discover it. Winter vacationers began to wear skis and to go down the wonderful and yet ungroomed deep snow slopes. Ampezzo became rich and from then on Cortina was internationally known as the “Pearl of the Dolomites” and also “Queen of the Alpes”.  On August 25th 2009 Auronzo di Cadore was the place where the UNESCO recognition event of the DOLOMITES World Heritage Site was held.